Your browser is not supported. Please update your browser.

Plants and crops can be susceptible to diseases and various pathogens, including powdery mildew, especially when certain conditions are met. As crop protection remains paramount, it is essential to proceed quickly and effectively in this direction. Or to act to prevent this type of problems. And with Thymox products, it is possible to intervene efficiently on the plants, without harming the environment.

Thymox biopesticide is potent, non-irritating and safe for plants, animals and humans. In the agricultural sector, large or small, it offers broad-spectrum efficacy thanks to the antimicrobial power of thyme oil – active even on anti-mosquito resistant pathogens.

These characteristics make the Thymox biopesticide particularly useful for crop protection, since its action preserves the plants and fruits from the ravages of various pathogens, including powdery mildew, or lessens its effects. It thus ensures a reduction in pre-harvest losses of fruit and vegetable crops.

Powdery mildew, a threat to crops like wine grapes, strawberries

Powdery mildew is a fungus of the erysiphaceae family that can contaminate trees, shrubs, vegetable plants and crops of berries and wine grapes. It attacks the leaves and stems of plants and can also appear on their sprouts, their fleurs, and sometimes even the fruits.

Powdery mildew weakens the plant and reduces its production. It also changes the appearance of infected fruits or vegetables, making them unattractive for sale and consumption.

Powdery mildew infection usually occurs in the spring, but it can also set in during the summer or fall. This fungus needs to land on plants to grow. Its spores are carried by the wind on the plants, and they can even remain in the soil until the next season, infecting the next crop.

The damage caused by powdery mildew can vary depending on the stage of growth of the plants at the time of infection. As we mentioned, the fungus can attack shoots, flowers and even the fruits of the plant.

The following figure shows the Triangle of Plant Diseases. It provides an overview of the factors that generate a disease and makes it possible to determine whether a particular crop is likely, under the given conditions, to develop a disease. It also offers the possibility of determining the conditions of aggregation. On the basis of this information, a preventive or curative intervention may be decided. 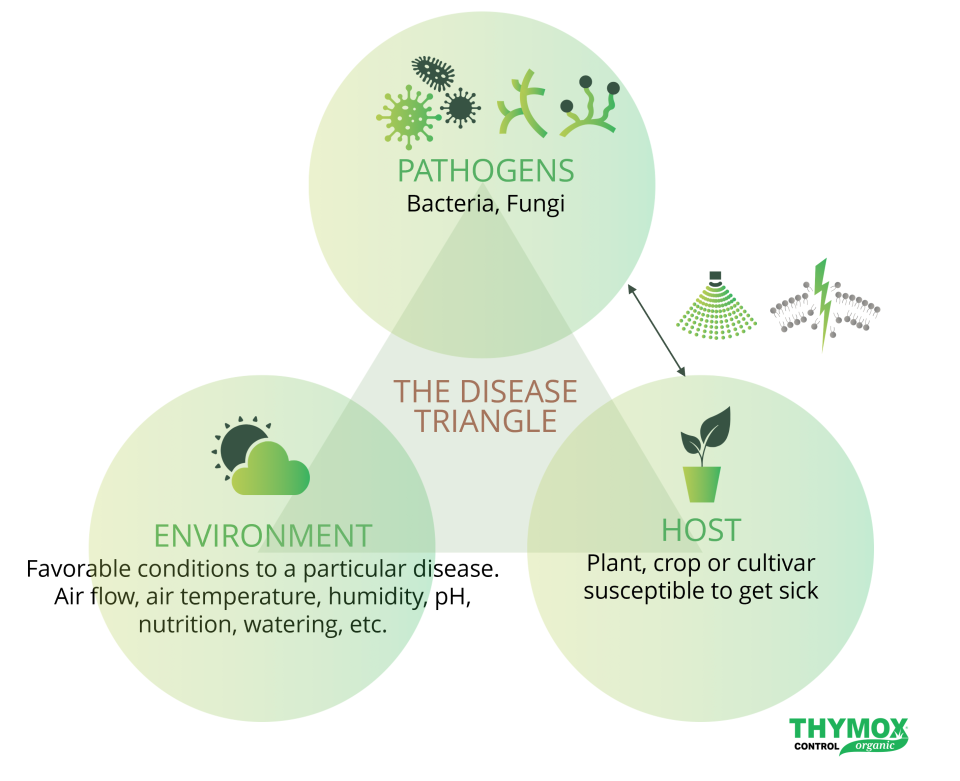 Thymox biopesticide, a solution to powdery mildew and other pathogens

Treatment of powdery mildew can be done preventively or curatively when the infection is declared. This involves using a fungicide to kill spores and fungi that cause or could cause infection.

Thymox biopesticide is a very effective solution for the treatment of powdery mildew. It is a powerful antifungal and safe for the environment and humans. It can be used directly in spraying outdoors as well as indoors as well as in greenhouses. It does not require any mixing beforehand.

Thymol (27%), extracted from thyme, is the active ingredient that eliminates the powdery mildew fungus and its spores, in addition to acting on other pathogens harmful to crops.

AlgaEnergy is a European company recognized for its innovations in bio culture. It has built an industry that offers sustainable solutions for all sectors of agriculture, from agricultural production to animal nutrition.

This renowned company is present in the world’s leading agricultural markets in Europe, America, Africa and Asia-Pacific.

We are very proud that our products, including Thymox biopesticide, are offered in these markets by AlgaEnergy.